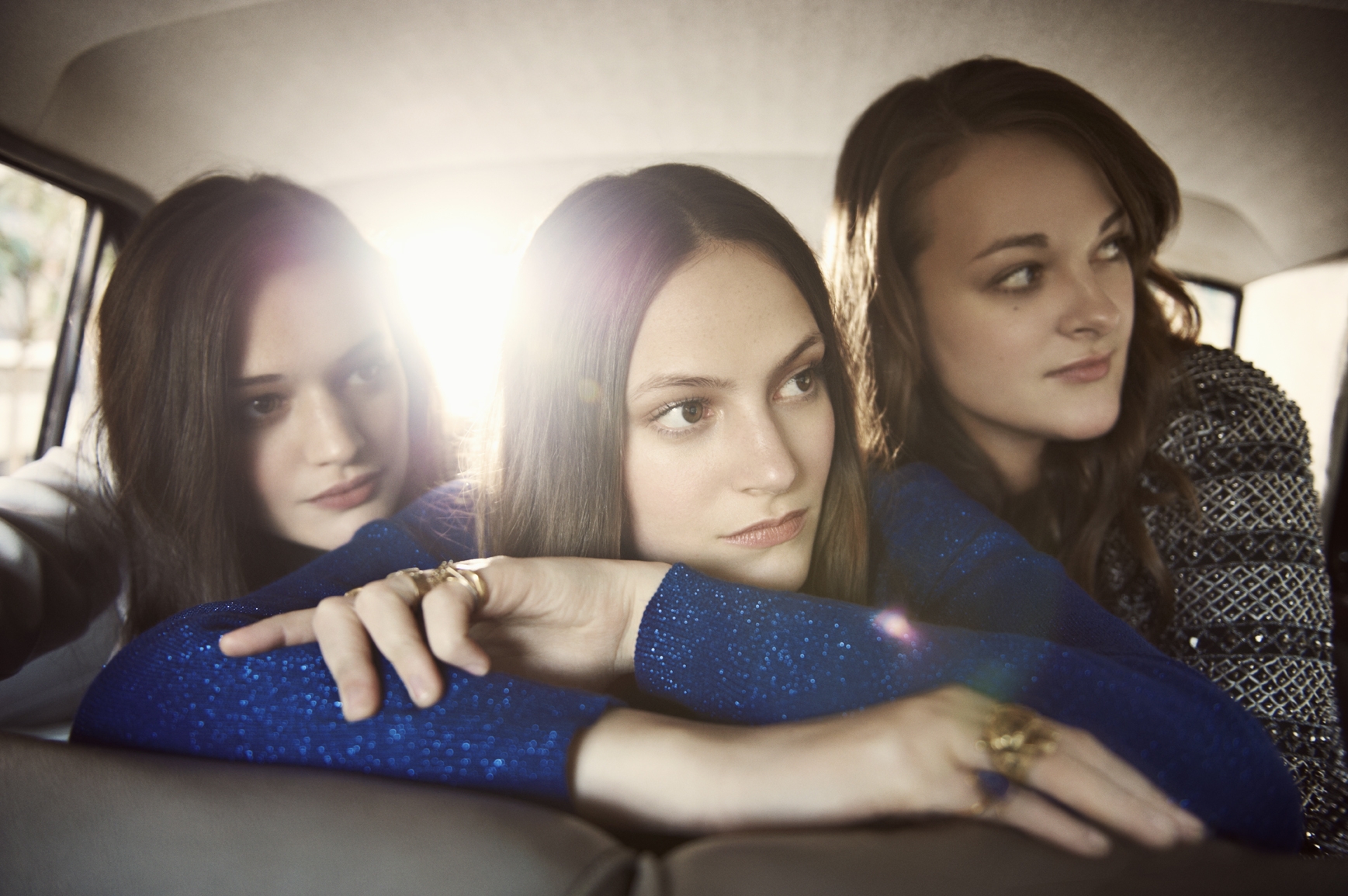 Saw The Staves tonight (6/23/13). There’s nothing like the natural shimmer of three-part sibling harmonies. Perfect music to hear before taking a walk under the gorgeous “Super Moon.”

They first hit my radar via an NPR Music pre-SXSW sampler that Bob Boilen’s team put together. Logistics kept me from seeing them in Austin, but their album has been in rotation since then.

I’d actually made guest-list arrangements to see another band on the west side, but later learned of the Staves show at the Bootleg Bar, and spent some time calculating how much of that first set I’d need to miss to get to the other venue for the Staves. Alas, I was actually relieved to be told, “I don’t see your name, sir.” Didn’t press it, didn’t try to contact anyone to fix it, just thanks and hopped back in the car and told my wife, “Woo-hoo! We’ve got time for dinner and the Staves!”

She had no idea what I was talking about, but she’s a fan now, and I’m a bigger fan than I was at the start of the night.

The trio (backed at times by a bass player and drummer) were funny, terrifically talented and very British. But how best to describe their music? The best I can muster at the moment is that there’s a strain of contemporary folk/Americana that more than a few careers have blossomed around recently. Think acoustic instruments, a kick drum and tight harmonies.

Get it at Amazon

As they close in on the final stretch to logging the largest grossing tour of all time,U2 capped a two-night stay in Southern California on Saturday (6/18) with a show long on big-box revelry but blended with moments of intimacy and grace.

It also proved a far better show than the band’s 2009 Rose Bowl extravaganza in Pasadena, which made for terrific sight and sound on YouTube, but proved less than satisfying in that cavernous stadium’s many echo zones. By contrast, the sound was better at Angel Stadium of Anaheim, as was the setlist.

U2’s greatest strength as a band throughout its 30-odd years has been its voice. Not just Bono’s wail, but the band’s political and social voice — it’s ability to embrace causes and nurture communities, with its brotherhood among musical contemporaries and teachers fueling some of the band’s brightest moments (i.e. their collaborations with the likes of B.B. King and Mary J. Blige).

Along those lines, the band, joining with Bruce Springsteen and the E Street Band, were instrumental in introducing the work of Amnesty International to millions of fans with 1986’s Conspiracy of Hope tour (U2) and 1988’s Human Rights Now! tour (Springsteen), and happy and sad remnants of those travels punctuated Saturday’s show. First was the late-set celebration of Aung San Suu Kyi’s late 2010 release from Burmese prison with “Walk On,” underscored by footage of the peace activist as Amnesty International candle vases were marched out and mounted in a circle around the stage.

This was followed shortly by the show-ending “Moment of Surrender,” performed as a tribute to E Street Band saxophonist Clarence Clemons, who died Saturday, succumbing to complications from a stroke suffered last Sunday (6/12). Bono began the song by asking the crowd to hold up their cell phones and intoned, “I want you to think about the beautiful, symphonic sound that came out of one man’s saxophone.” At the end of the song, he read the closing verses to Springsteen’s “Jungleland” as The Edge strummed his guitar.

But this was a long show, clocking in at about 2 1/2 hours, and covered quite a bit of ground before the emotional finales.

From the outset, the band seemed intent on shaking things up, departing from some of the trappings of their fairly staid setlist on this leg of the tour, which Friday night’s (6/17) crowd got.

“The Fly” made its first appearance since 2006 in the #2 slot of the show, locking in a deep-dive into “Achtung Baby” material at the front-end of the set. Indeed, by the time the band launched into “Where The Streets Have No Name,” from the “Joshua Tree” album, they’d performed nearly half of the “Achtung Baby” album.

With that kind of setup and coming off of a great performance of “One,” “Streets” soared, but that’s really what the song does in any position — it’s a built-in emotional high-point. Which set in some concerns that perhaps the show had peaked early when, by contrast, “I Still Haven’t Found What I’m Looking For” came across feeling a little lackluster a few songs later.

But they rallied with an acoustic “Stuck In A Moment” that connected and “Beautiful Day,” couched as a sweet love letter from U.S. Shuttle Endeavour’s commander Mark Kelly to his wife, U.S. Representative Gabrielle Giffords. Kelly was recorded gamely reading the song’s lyrics while on the International Space Station during the shuttle’s final mission and adding, “Tell my wife I love her very much, she knows” — a wink at David Bowie’s “Space Oddity,” a space travel classic and the song U2 walks to the stage with each night.

“Beautiful Day” is a favorite of Giffords and was chosen by her as a wake-up song for the shuttle crew when she and Kelly were first dating back in 2006. Since her nearly-fatal shooting in Tucson in January, the song reportedly has been in regular rotation in her room during her recovery.

The shuffle of the setlist helped recapture some of the sense of spontaneity that drove any number of classic moments in U2 lore, which has probably been the sorest point in their extended outing. The band seems to function best when their safety net is minimized, because at that point the audience becomes the safety net and the classic U2/crowd bond is realized.

The stadium era of U2 has wreaked some havoc on that dynamic, though. They became, like any stadium act, very reliant on massive production to present themselves to massive crowds, and that level of presentation takes a toll on audience connection, which is the life-blood of the band.

Anaheim #2, while late in the game, showed they’re chipping away at that distance, and perhaps finding a way to make this stadium thing work after all.

Setlist:
Even Better Than The Real Thing
The Fly
Mysterious Ways
Until the End of the World
One
Where the Streets Have No Name
I Will Follow
Get On Your Boots
I Still Haven’t Found What I’m Looking For
Stuck In a Moment
Beautiful Day
Elevation
Pride
Miss Sarajevo
Zooropa
City of Blinding Lights
Vertigo
I’ll Go Crazy (remix) / Discotheque / Please
Sunday Bloody Sunday
Scarlet
Walk On
Ultraviolet
With or Without You
Moment of Surrender / Jungleland (recited)

U2 launched their much-awaited 2005 tour Monday night (3/28), treating an adoring opening-night crowd to a set that comfortably straddled their 25-year recording career and still managed to include some surprises.

When U2 released “How To Dismantle an Atomic Bomb” in November of 2004, tour plans became an immediate topic of discussion, with a year-long routing sequence laid out by the band’s manager and a new, improved pre-sale system touted by the band’s revamped fan club. Then the whims of fate stepped in.

The tour’s original Miami launch was scuttled, owing to either illness affecting a band member’s family or tour routing issues, depending on the source. And the first round of fan club pre-sales were dogged by technological and logistics problems, which touched off a brief and rare period of tension between some longtime fans and the band. In the end, the tour plan was fixed, the ticketing problems were fixed and the band regained the goodwill of their long-loyal followers.

Against that backdrop, Monday’s opening-night show held a distinct sense of relief and celebration for both those holding instruments and those holding tickets in the arena.

Stepping to the microphone to the opening strains of “City of Blinding Lights,” with glitter confetti raining down on the general-admission crowd on the floor, Bono seized on the song’s chorus, “Oh, you look so beautiful tonight,” as a gracious welcome to the packed house. Perhaps more telling, though, was the tone set by the song’s first verse, the words of someone feeling their best days may be behind them:
END_OF_DOCUMENT_TOKEN_TO_BE_REPLACED

In an intimate Hollywood performance Tuesday (3/22), Kathleen Edwards brought her band through a rotation of strong roots-rock numbers, but ultimately made her biggest impact with her quieter songs.

Taking the stage at the Knitting Factory, Edwards quietly eased into the disarming “Pink Emerson Radio,” a dream-like assessment of mementos and memories glimpsed in the moment before rushing from a burning house.

Loss is a major focus of Edwards’ current repertoire. Much of her latest release, “Back To Me,” deals with it, but never passively. Rather, the protagonists in her songs are fighting to keep from losing companions, realizing they’ve lost a fight and walking away to fight another day, or just digesting the fact that things have changed.
END_OF_DOCUMENT_TOKEN_TO_BE_REPLACED

Blue Note records drew snickers and jeers from jazz purists in 2002 when they took a chance on an artist named Norah Jones, who was surely not your father’s jazz crooner.
END_OF_DOCUMENT_TOKEN_TO_BE_REPLACED

Kathleen Edwards is a name mentioned in seemingly every known music magazine in recent months, either anticipating or praising her March release, “Back To Me.”
END_OF_DOCUMENT_TOKEN_TO_BE_REPLACED

Outside of the college radio circuit, most people in the U.S. who are aware of Tino Dico know her as a vocalist for ambient mood-makers Zero 7. But in her native Denmark, she’s known mainly as a solo artist, and an award-winning one at that.
END_OF_DOCUMENT_TOKEN_TO_BE_REPLACED

Rachel Loy kicked off the St. Patrick’s Day festivities Thursday (3/17) at Momo’s, clad in green and starting the night with a great mix of smart, playful and very tuneful adult pop.
END_OF_DOCUMENT_TOKEN_TO_BE_REPLACED

Grammy nominee Tift Merritt raised the roof at the venerable Troubadour nightclub on Friday night, making good on the promises that 2004’s “Tambourine” laid out for her.
END_OF_DOCUMENT_TOKEN_TO_BE_REPLACED