The concept of a clearfix didn’t really ring a bell for me until a couple of years into dedicated web work. It felt like a hack, maybe even a shortcut, and my instinct was that good old properly-syntaxed HTML and CSS would win the day.

I didn’t know what I was really talking about. Today, as we await final spec approval for Flexbox and eventual browser compatibility, we’re still in a place were block elements need to align themselves in some way.

If one doesn’t need to displace other elements, absolute positioning is always an option. But if vertical alignment needs to happen, you’re generally going to need to float something.

And that’s where a dependable clearfix can make life a lot easier. 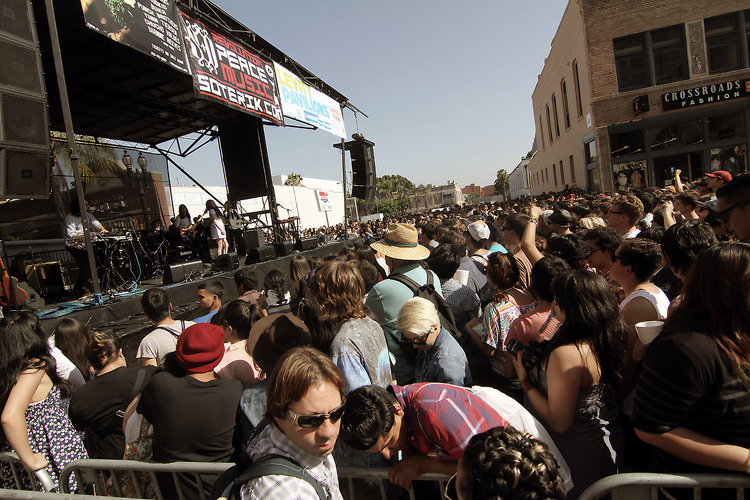 Make Music Pasadena marks 6 years this year, holding to the same recipe that put it on the radar in 2008: Free music on a handful of stages with Old Town Pasadena as a backdrop. Of course, it’s gotten bigger, boasting upwards of 100 acts on around 30 stages largely sprinkled between Fair Oaks and Lake, the main stages outdoors and a large swath of more intimate showcases tucked into the area’s bars and other buildings, including the public library. But, as with any entertainment buffet, one needs a battle plan, or you just end up like so many overwhelmed SXSW attendees, unable to name the tiny handful of bands they accidentally saw snippets of while feverishly texting all their friends to find out what stage they’re at.

Pre-fest tip #1: Listen to some music in advance and sketch out a grazing list.

Nothing sucks more than realizing after a festival that that one song stuck in your head from your local NPR music show is by a band that played 100 yards away from you while you chilled out at the snow-cone stand, bored and checking Facebook. Search up a few band names in SoundCloud or YouTube. You’ll begin working up a list of yays and nays pretty quickly.

When 30,000 people converge on a small area, parking becomes a major hassle. In this case, there’s a built-in buffer: The Gold Line, the above-ground train that runs from the eastside (the real eastside, you Echo Park hipsters) up through downtown L.A. and into the eastern end of Pasadena . Check out the Metro site to scope the train stations, many of which provide easy, free parking. Pay the small fare, ride into the Memorial Park stop on Holly and you’ll exit that station to the sound of music coming from  a few directions if you arrive after noon.

Dress accordingly. Get some sun-screen in that backpack. Granted, the forecast of 84 degrees isn’t breaking any records, but hustling around the city on foot (or on their handy ARTS shuttles when they’re not packed with people) will get your core temp up. Hydrate, too.

Logistics, fatigue and temperamental companions (c’mon, we all turn into those Snickers commercials when we get hungry enough) will scuttle the best of plans. Map out your day with two, maybe three possible bands for each hour, in case the first one that sounded so good on SoundCloud just happens to suck on stage. Or maybe you just don’t want to make the five-block hike to catch the last 20 minutes of that other band. Worse yet, that place you suggested everyone meet at for dinner has an hour-long wait because fo the crowds. Have an alternate plan in your back pocket–literally, in digital or paper form, in case you go into any Snickers commercial mode and can’t think straight. That should just about cover the basics. Toss in a hat, camera or earplugs as needed and enjoy. And if you’re so inclined to make sure this fine fest circles around next year, toss a little donation their way.